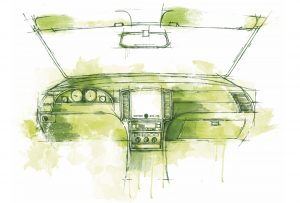 No matter if speaking with someone on the phone without a head set, typing short messages or even taking a selfie – between 26% and 42% (depending on the activity) of drivers aged 25 – 34 don’t even put their smartphones down behind the steering wheel.

Mind you, this type of distraction is not just a minor carelessness: Besides the 60 Euro fee and a penalty point in the driver’s records, they put their own lives as well as those of other traffic participants at risk. „Calling someone without hands-free equipment is as dangerous as driving with 0.8 per mille. Typing on a smartphone equals a blood alcohol level of 1.1 per mille“, says the Interior Minister of North-Rhine-Westphalia, Ralf Jäger.

However, while DUI has become socially outlawed, many consider the usage of a smartphone while driving a trivial offense. According to estimates, about 10% of all accidents are caused by some kind of distraction of the driver – about as many as are caused by the influence of alcohol. So, apparently there’s a lack of awareness of the problem. According to an ADAC study, the majority of drivers substantially underestimates the dangers of distraction and the decrease of the ability to drive. In the study, 66 persons had to go through a defined parcours while being asked to fulfill several tasks. „The subjects overestimated their abilities – men more so than women.“ says ADAC traffic psychologist Ulrich Chiellino. All traffic participants should be aware that everything they do in the car while driving will definitely distract them from the task of driving – also and especially using a smartphone and trying to operate other technical equipment in the car, such as GPS devices.

Given the ever more complex communication situation in the vehicle, it is a matter of urgency to give the driver the tools with which they can avoid such distraction. The technology in the car must be operable without using hands and without having to take the view from the street. The only reasonable and comprehensive method to do so is voice control. Current systems, however, lack the ability to communicate and interact with the driver in a completely natural way – let alone support them pro-actively in case help is needed. That’s why SemVox focuses on intelligent, pro-active and dialogical assistance systems for the operation of applications such as telephony, navigation and office functionalities. Short messages and social network messaging can be dictated and posted all by voice. „Text message to Mike: Will be a bit late, but you can already fire up the oven!“. Complex tasks such as the programming of a navigation system can be done with a single sentence, and if there were scheduling conflicts, the pro-active assistant can point it out to the driver in time. It can even offer to send a message to the meeting participants and open the respective messaging channel – of course it has already deduced the correct contact information from the address book.

SemVox’ next-generation voice-based Human-Technology-Interfaces help to significantly lower the drivers’ cognitive load and hence their distraction. Intelligent and pro-active voice control and dialog systems are by no means pure comfort features but add safety to our roads.